So you've decided to lose weight. Now whether you need to lose 10 pounds or 50, its important to pick a good weight loss program. Losing weight isn't hard, there are just two components. All you have to do is limit your intake and eat less and follow that up with excersize in order to burn additional calories.

Nutritionists agree that if you’re looking to permanently reduce pounds, your weight loss program has to be sustainable, offer realistic goals, and (gasp!) be enjoyable enough to incorporate into your lifestyle for good. That’s right: Weight loss programs are most successful when they help you break unhealthy patterns to become your new way of life - not just help you lose weight.

All our top picks prize these values, but we dug into plan details, read books, toyed with apps, taste tested both recipes and prepackaged food, and followed exercise plans to find the best. Time-tested Weight Watchers came out ahead. A revamped, nutritionist-approved points system helps participants measure and adjust food habits while focusing on healthy eating instead of just losing weight, and a suite of useful support options from apps to meal plans to meetup groups let consumers tweak an approach that works best for their lifestyle and budget. Our tester found making healthy changes to her diet easy and fun even on the first day.

But ranking diets is a highly personalized affair. Self-starting dieters who just want to be pointed in the right direction might prefer the DIY approach of the Mayo Clinic Diet, which pairs a book of instructions with website support to guide your efforts in the kitchen. Its two-part strategy kickstarts with 14 days of calorie restrictions followed by gentler guidelines; some might be inspired by the “instant” results, but others could be put off by its initial intensity and subsequent free-reign approach

If you dislike cooking, abhor making food choices, or simply want low-calorie options shipped to your door, Nutrisystem might slot into your life as-is with minimal fuss. But it can get expensive, and food selection and flavor were both hit-or-miss

If you’re on a budget, the SparkPeople's Spark Solution Diet offers a book, recipes, a robust website with tracking, and a vibrant online community for free. But even though there are seemingly endless tools and support options, it really only has one 1,500-calorie plan that is supposed to fit everyone - and that’s just not realistic

To find the right diet for most people, we looked into the research, ranked them based on universal best principles, and talked to experts from leading national health organizations. Then, our tester lived each of these diets for a day to see how feasible it was to stay on them. Our first challenge was figuring out which to explore. There are endless diets targeting gender, vilifying certain foods, and requiring extreme lifestyle (sweat lodges, anyone?). To cut through the noise, we turned to the 16 available diets included in the U.S. News & World Report Best Commercial Diet Plans rankings - diets marketed to the public, for profit. Its annual survey involves a months-long study with a panel of respected doctors and nutritionists (all the experts we spoke with have served on this panel) and we used those diets as our starting place.

The most successful diet is the one you won’t quit, so we asked our experts how they determine that quality in a diet plan. Registered Dietitian Andrea N. Giancoli, who was the spokesperson for the Academy of Nutrition and Dietetics for nine years, advised U.S. News & World Report diet rankings for three years, and served as nutrition policy specialist for Los Angeles schools, helped us narrow the pack.

“If you really want to lose weight and be healthy and good to your body, you have to pick something that you’re going to be able to do over the long term,” she said. “A lot of these fad diets, you get carbohydrate cravings or you just aren’t eating enough and you get hungry. And then you feel like you’ve blown the diet, but the diet failed you."

To narrow our pick we first cut diets that expected you to make a life long commitment. Yes this is the best method, but let's be honest, most people just don't have the willpower to stick to this. We then cut diets that didn't incorporate excersize, most of these diets are just fads. Then we removed diets that expected you to eliminate entire food groups...no meat? no carbs? that just not something youl'll be able to stick with. This left us with 5 diets. From these, we then eliminated diets that were similar to each other. And the winner became obvious....Weight Watchers

Weight Watchers is a name you most definitely know, and we found it to be the best in the field. Part of it is history - Since 1963, Weight Watchers has helped more than a million people lose weight, and that success has helped the company fund its own studies and tweak its program based on its scientists’ discoveries. The company is constantly evolving: Weight Watchers changed in December 2015 with its Beyond the Scale program, including more of a focus on overall health instead of just weight, and nudging members toward an eating pattern filled with lean protein, fruits, and vegetables, while reducing sugar and saturated fat

Weight Watchers makes healthy eating patterns stick by introducing users to a currency called Smartpoints, which take the mix of calories, saturated fat, sugar, and protein in a given food and then spits out a number: the food’s point value. Within its app, you can search for a specific food, such as chicken, and find the nutritional info. Caloric choices are then made clear in granular detail, right down to differences in preparation: A fried chicken wing is 7 points, while 3 oz. of chicken breast without the skin is 2 points. A sugar-laden Coca-Cola is 9 points, but so is a dinner-sized serving of Moroccan chicken rice and potatoes. Points are like dollars: You’ll get a budget every day plus a weekly bonus to “spend” on calorie-heavy events like a party, buffet, or binge of your choice.

A sample breakfast might include a smoothie with unsweetened almond milk, protein powder, and a points-free banana. For lunch, our tester could choose between a salad with some tuna fish or an open-faced avocado and balsamic sandwich (both great). Snack fruits like peaches, apples, or pears get you through the long stretches of the day. Dinner consists of a lean protein, a hot vegetable, and a side salad. (Precise measurement is key to sticking to your plan: 2 tablespoons of dressing is one point; eyeballing it with a glug from the bottle might mean you’re pouring twice as much.

One downside: It’s harder to track your meals at fancy or neighborhood restaurants. You aren’t likely to find in-app points for the locally sourced boar fettuccine, potato-crusted petrale salad, or spicy grilled octopus salad that appeared at our tester’s favorite restaurant. But you can search to see if anyone from the Weight Watchers Community has added a similar meal, or you can estimate how much of each item is in a dish and track it individually, with the option to save the group as a meal for later (3 oz. of boar, for example, is 2 points, which we were amazed to find in the app). As a last resort, you can guess and manually enter your meal into the app. 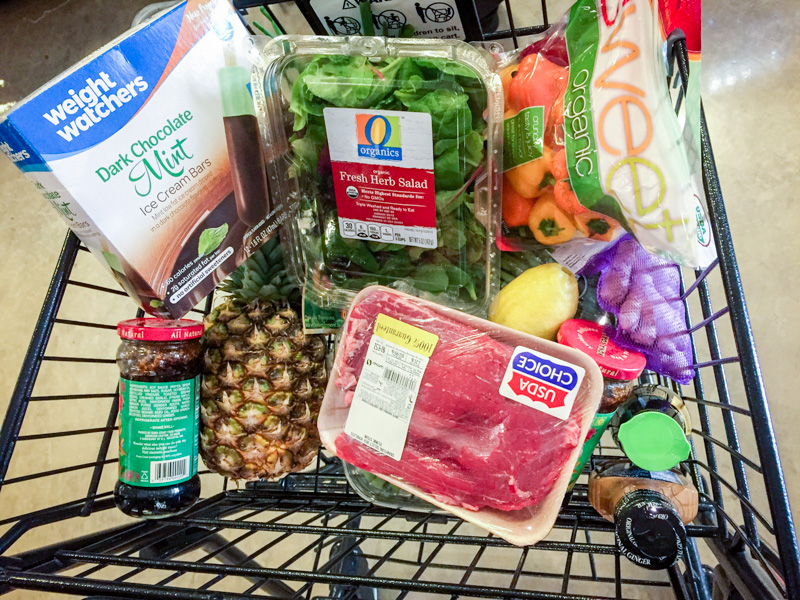 This ability to monitor, measure, and modify with easily understandable points is really what puts the program over the top. Weight Watchers emphasizes that no food is off-limits. But when you see you could spend 30 points on one Chili’s Classic Bacon Burger or have chicken with rice and beans and three beers for the same amount of points, you start to realize the cost certain foods have on your body. A recommended focus on fruits and vegetables (mostly 0 points), lean proteins, and whole grains - which mirrors the advice of our experts - becomes second nature. And, most importantly, our tester didn’t feel too hungry at the end of the day, and learned that small choices throughout the day add up over months of sustained effort. 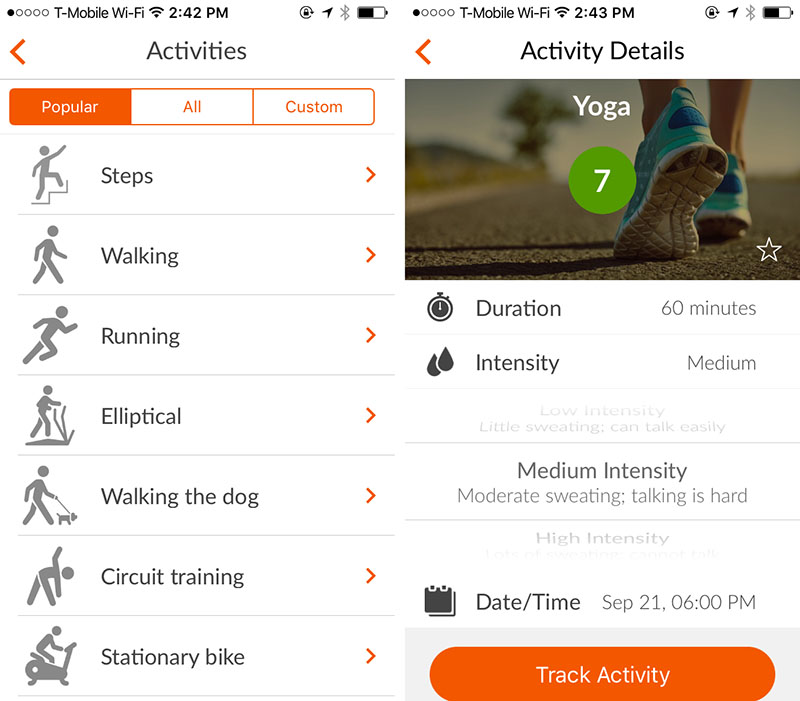 Weight Watchers similarly tracks and incentivizes exercise by assigning users a weekly goal of FitPoints, which can be synced with tracking devices via the app. Our tester was assigned 27 points a week: An hour of low-intensity walking would earn her 7 points, while an hour in a high-intensity spinning class would earn 19. She aced her goals by doing yoga four times a week, and the point tracking kept her motivated to move. Logging food and exercise points might seem annoying: You have to pause your exercise or take time before or after you eat to make sure it gets done. But as business experts often say, what doesn’t get measured doesn’t get managed. You’ll have to measure quite a bit while on Weight Watchers - but the same can be said on any other program where you’re not eating prepackaged food.

Speaking of, Weight Watchers has an empire built on prepackaged food - especially in the in-person meetings it offers. The meeting we attended was stocked with water enhancers, snack bars, chips, and food in a pouch for purchase. We tried some and really liked it: The chips with hummus were puffed -a great way to add bulk without calories. And the tikka masala we paired with a cup of rice was shockingly delicious. Plus, we learned something about managing points: After we calculated the points for the rice (6), in retrospect we would’ve eaten just half of a serving size and spent those 3 points elsewhere. That’s a key idea we heard in the Weight Watchers meeting: learning which foods are “worth it” for the points.

At all levels of membership, you weigh yourself once a week to track your progress. Weight Watchers online is $20 a month, which gives you access to the app. You can also shell out $45 for the weekly meetings, where someone with a voice between a preacher and an infomercial host will lead people to share successes, offer lessons, and remind you about tips for upcoming holidays or other diet dangers. Our tester found the meetings genuinely nice, if a little cheesy.

Whatever level of support you need to meet your goals, Weight Watchers provides to help you lose weight while still maintaining a social life and it offers a menu everyone can eat at home. More than any other competitor, Weight Watchers feels like a company that you could trust to escape the insanity of most of the diet industry and make some long-lasting changes.